A glimpse in the past.

Our island’s story has intrigued curious visitors for years. Read on to learn about the history of Kelleys Island, and where you can see pieces of the past today. When you visit, be sure to take a close look, because around every corner and behind every door, there is a little bit of island history! 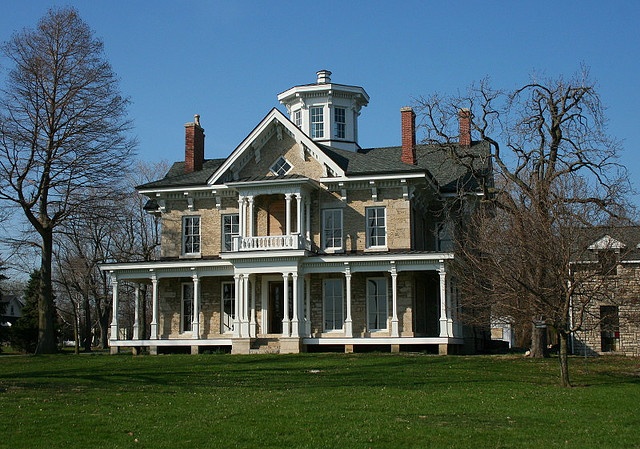 The Great Lakes and the Lake Erie Islands were formed by the movement of a massive sheet of ice during the last ice age. As these glaciers created Lake Erie, they rolled over a massive block of Columbus Limestone which became known as Kelleys Island, carving magnificent grooves into the island’s north side. Over the years, many grooves were uncovered only to be quarried out. However, in 1892, a small section of quarry land was set aside by the Kelley Island Lime & Transport Company to preserve one of the last grooves. Thanks to the company’s generosity and foresight, the Glacial Grooves were saved for future generations to study and enjoy. The most popular attraction on Kelleys Island, the grooves are located at the corner of Division Street and Titus Road, right next to the Kelleys Island State Park.

Indians also left their mark on the island. While there were no year-round villages here, the Indians did have several permanent sites that they visited in the spring and fall to take advantage of the exceptional fishing in the area. At one time there were two Inscription Rocks. The smaller one was located in the North Bay and has long since vanished. The larger one remains on the south shore. In 1885, Addison Kelley and others filled in the carvings on this rock so they could be photographed for posterity, as they were already wearing away due to the soft nature of the limestone rock on which they were carved. Inscription Rock is located on the shoreline just west of the Kelleys Island Ferry dock, at the intersection of Lakeshore Drive and Addison Street.

Two brothers from a prominent Cleveland family, Datus and Irad Kelley, were looking for an investment opportunity and chose the island because of its dense forest of red cedar, which was highly prized as steamboat fuel. Another feature was the small quarry on the north side of the island. In 1833, the brothers began slowly purchasing all the parcels on the island. At the time, the island was casually known as Cunningham’s Island, after the first European settler to have lived here. The name Kelley’s Island was formalized when the island became a township in 1840, and then a Village in 1887. Common use has dropped the apostrophe.

Irad returned to Cleveland while Datus and his wife Sara remained on the island, building a small, close community. In 1861, Datus and Sara paid for the construction of a town hall; on their 50th wedding anniversary, they dedicated that building to the community. Much of the island’s history comes from the hand-written newspaper, the Islander, which was published weekly each winter for 17 years. This paper contained family histories, reviews of plays and events, weddings, funerals, jokes, current events and wonderfully detailed essays about life on the island between 1861 and 1877. The paper was read and discussed each Saturday evening, with upwards of 300 people attending the Kelley’s Hall meetings.

As the island’s population grew, the one-room schoolhouse became four school districts and later one large brick school. The Catholic Church, once located in the Lange house, became the first of five churches to serve the island. Islanders made their living by fishing for blue pike and whitefish as pound nets and later gill nets peppered the lake. Multiple small quarries were recombined into the Kelley Island Lime & Transport Company, one of the largest quarrying operations in the United States. The company owned an massive fleet of geared Shay locomotives that hauled quarried stone out to docks on the island’s northern, southern, and western shores. The island’s lake-tempered climate made it ideal for growing the grapes – Catawba, Niagara, and Isabella – that made Kelley’s Island wines famous. Massive stone wineries were built in the 1800s as Kelley’s Island wines became popular across the country.

The second half of the twentieth century brought many changes to the island. The Kelley Island Lime & Transport Co. dissolved in the mid-1960s, while the last operating quarry closed in 2007. As quarrying activity has wound down, the island has become more focused on tourism. Winemaking, which was largely snuffed out by Prohibition, has returned on a smaller scale. The legacy of the Kelley family lives on in the stories and the care given to our historic buildings and places. Our history can be found in the winery and quarry remnants scattered around the island, among the headstones of our cemetery, and in the informative displays of the Kelleys Island History Museum. For those interested in learning more about this island’s history, a visit to the museum is a must. In addition to the displays and collections of island artifacts, visitors can also tour the historic German Reformed Church, built in 1866, and explore the museum gift shop, which features gifts, souvenirs, and a full collection of island history books.

The chamber would like to give special thanks to Leslie Korenko, Kelleys Island historian and author, for writing this short history of our wonderful island. For more information on Leslie’s writing, visit her website, kelleysislandstory.com, or check the museum gift shop for her detailed island history books.