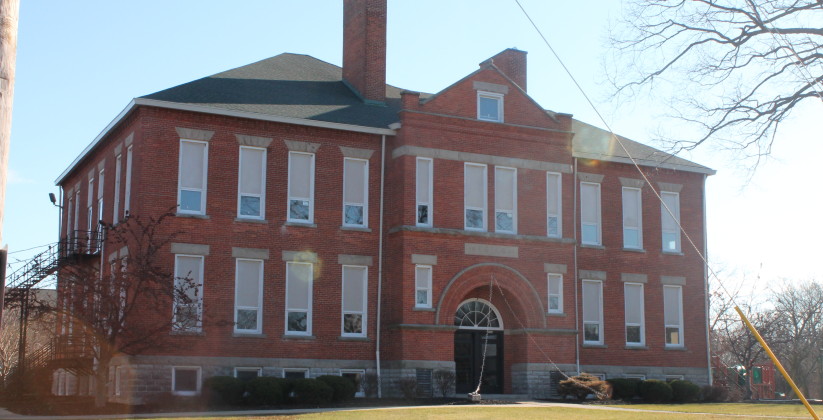 THESCHOOL IS DEDICATED TO JAMES ESTES

James Estes died of heart disease at Cleveland on October 28, 1898. The island was expanding and for years, there were expressions of concern that the island’s brightist and best would leave for better educational opportunities. From Datus Kelley’s time, education ranked high on the list of goals for the community. It was through the largess of James Estes that the massive brick school on the corner of Ward Rd. and Division St. would be built and named after him: Estes School. His will showed great thought and foresight in considering the benefit to the community. “I desire the sum of $10,000 be paid to the Directors of Kelley’s Island Special School District to be used by them in the erection of a central school building on the site now occupied by the High and Primary School in central part of the Island. And in ornamenting and beautifying the grounds.”

The community was involved and on November 28, a meeting was held at Kelley’s Hall “to decide whether the citizens wish to have bonds issued for the erection of a substantial school house, to be built at the cost of about $18,000, $10,000 of which were willed to the village for said purpose by the late J. W. Estes.”

A special election was held to decide the issue on November 28. The ballot read: “Special Election – Special School District of the Village of Kelley’s Island, Erie County, Ohio.

AGAINST levying taxes for the purpose of erecting a school building, to amount in all to the sum of $6,000.00.

FOR levy therefore to be made from year to year.

AGAINST levy therefore to be made from year to year.

FOR levy of two mills each year on each dollar of taxable property, until said amount of actual cost of said school building and furnishings same is raised.

The voter will put his X to the left, opposite the proposition he wishes to vote for.”

The proposal was overwhelmingly defeated; “the vote being 26 for to 129 against. The board has now in cash on hand $10,700 from the Estes estate and expect to get $700 more. It also expects to sell the present school building and a part of the grounds for $1500 to $2000 making about $13,000 with which to erect the new building. The taxpayers thought that was enough.”

By the end of January 1902 the new school is described as “’a great work accomplished by your school board.’  Yes, the donation given by M. Estes has been used to advantage.  On the loveliest spot of ‘the Pearl of the Lakes,’ among evergreens and the forest primeval, has arisen a stately school edifice.  It is destined for the youths of the isle.  Its aim is to arouse, strengthen, illumine the young minds rather than store them with learning.  This is an opportunity rarely given or appreciated.  They may move about in nature’s kingdom and become a part of all they see, grow akin to stones and leaves and birds and to all young and happy things.  Theirs are the fair spring days when they may suck honey that shall nourish in undreamt of winters.”

The final cost of the building exceeded the amount the voters approved and in February 1902 – “The new school house seems to be a hoodoo.  It has been the cause of several contests already.  The building was erected by Geo. W. Doerzbach of Sandusky at a cost of $16,000 or over.  The $11,000 bequeathed by the late Mr. Estes, together with $1,000 or more of surplus in the School Board's treasury, and over $1,000 realized from the sale of old buildings, have gone into the structure. It is currently reported that the members of the school board in order to pay off the contractor have borrowed $3,000 or more at one of Sandusky's banks, giving their personal notes…”

In April 1902, the controversy played out at the polls. “The fight was largely a result of the building of the new school house.  The late James Estes left a bequest for the building of the school and the board of education exceeded the amount by about $2,500, running into debt for that amount.  Relief was sought at the hands of the legislature, and James Hamilton and others got up a counter petition, protesting against this.  Feeling ran high and charges were made that the school board had been extravagant.  Henry Elfers was president of the board and sought vindication.  A movement of citizens was started in opposition to the Republican politicians, and an independent ticket, composed of three Democrats and the balance Republicans, was nominated by petition.

The election was a complete vindication of the school members, O. W. Brown and John Miller being re-elected without opposition and the Citizens’ ticket elected by big majorities.”

He listed his occupation as grape grower and he lived on the southeast side of the Island in a lovely stone house his parents built. The family monument is located in the Island cemetery and cost $5,000. “Mrs. Eva Cameron, trustee, has awarded the contract for the memorial to the Hughes Granite and Marble Co. of Clyde, O. The monument will be one of the finest in northwestern Ohio, of Romanesque design, massive, and with elaborate carvings. Competition for the work was very sharp, some 8 or 10 leading monument firms bidding, among them one from Barre, Vt., but the design submitted by the Hughes Granite and Marble Co. was pronounced the finest of all for the sum stipulated in the will, and the contract was accordingly given that enterprising company.”

There has been a tradition to have the students plant flowers at the Estes graves - It is believed that when James Estes donated the funds to build the new school he asked only that flowers be ever placed on the family monument in remembrance. As you drive by the cemetery you can see that is still being done.